Over the last few years, Stockholm alternative pop upstart Ida Tosh has been establishing her unique sound and beginning to make a name for herself as the latest in a long line of exciting pop sensations from Sweden.

The latest release from the emerging talent is her new single ‘Saraha’, a track that is packed full of layers of immersive depth and emotion, while packaged as a poignant, instantly memorable pop bop. The track explores the realisation of the artist noticing how badly she was neglecting herself and the toll that it was taking on her, with sombre moments of gravity and introspection offsetting its transfixing and captivating soundscape. Following this release, we had a chat with Ida Tosh and found out a bit more about her journey and what plans the artist has for the future, including an upcoming EP.

Good question, I think you can find me somewhere in between a nerd and an extra extrovert. I love to write, but I hate to read. In all honesty Ida Tosh is who I want to be. Confident, uncensored and eager. Ask me in a few months and I’ll have a different answer.

I’ve been playing the piano since I was about 9 or 10 years old, but have since as long as I can remember been a songwriter. I used to play ugly chords and sing out of pitch then call it a song when I was home alone as a kid.

It’s the most rewarding thing ever. I could try to do without it, I think some things would actually be easier. But I have this urge to create, to connect with others and make something that other people can find themselves in. Music has always been a way of coping since I’ve dealt with a lot of difficult humans in my life. All in all, it’s making my life more joyful. Like there’s a meaning to all of this crap haha.

The album Pop 2 by Charli XCX changed the way I made music so I think I’ll always have a bit of Charli in my songs. I love FKA twigs, BANKS, Caroline Polachek, MUNA. They all influence my music in some way. But I’m also very inspired by clothing, makeup and MOVIES! I think I have at least 2 songs coming out soon written during movies.

I haven’t played live much since I started out in the beginning of the pandemic. But I think one of the best moments so far has to be when I had the release party for my song ‘Biggest Fan’. All my friends were there, it was a late summer night and they all SCREAMED along to my song. It was the best feeling ever and it made me very excited to play more liveshows.

From tears to music. I think both my lyrics and the production and everything around it sounds very real. My sound is cinematic, airy, bass driven and sexy.

Opening for MUNA. I just recently had a dream about it and told myself when I woke up that I would be their opener when they come to Sweden the next time. Totally realistic.

We love your new single ‘Sahara’, what more can you tell us about it?

Thank you!! So I started studying music production at university in 2020… It’s kind of a prestigious school so when I first started I was so excited to make music and meet like-minded people. A few months in the program I got so uninspired that I got stuck creatively. I think they call it impostor syndrome, I felt like I didn’t belong. Everyone was doing so much better than me that it eventually led to me almost quitting music. I just completely gave up on myself and went to a really dark place for a while. I wrote this song right when I realised how much hate I felt for myself at that time.

Sahara is actually the first song on my first EP (No friends, No luck, No money.) So I have a lot of stuff coming out soon. I’m planning some live shows and a lot of music! I might have a few videos as well…

My sister. She will always be my biggest supporter. 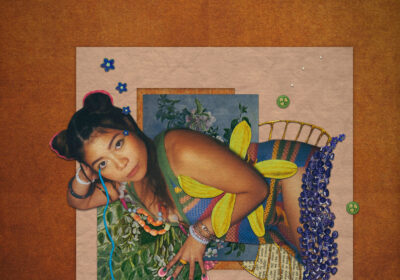 Who TF is Lotti?