Who TF are Luna Pines?

We had a chat with genre-bending electronic duo Luna Pines, following the release of their fourth single ‘Bright Blue’.

In modern times, music is growing increasingly difficult to genre or put labels on due to the outlandish and infinitely creative sounds that artists are bringing to the fore. One of such artists are Luna Pines, a lo-fi electronic duo who are rapidly turning heads with just four singles under their collective belt.

The release of the fourth of those singles ‘Bright Blue’ has been met with similar acclaim to those that came before it, and at CLOUT we sought after a chat with the duo, to find out a bit more about an exciting young act bubbling beneath the surface and the story behind their unique sound.

Who TF are Luna Pines?

I’d say it’s hard to fit us into a genre, but we’re a dream pop electronica duo based in London. It’s me on Vocals, Guitar, Synths, Samples (don’t ask me how i do it live haha) and Rob on Drums (but trust me his job is harder than mine, I annoy him with very hard beats to learn!) We produce, mix and master all our stuff just in my bedroom, and it’s kind of become a bit of a world of it’s own with our artwork and aesthetics also adding to this, made by our good friend Esme Hallam (@esmehallamdesign)

I’ve been playing Drums since I was about ten and then switched to keys/guitar a few years ago when I learnt how to properly produce at Uni. Rob started playing only at the end of high school but he’s the best drummer I’ve ever seen. I’ve been making tunes under this name since 2016 but spent years refining the sound/messing about with lineups until we started properly releasing this year.

It’s pretty much the only thing (apart from the people in my life of course) that I really love. I go crazy if I’m not making music to be honest. It becomes a bit of a problem haha, some of my friends say I’m a bit obsessive but it’s all good, you gotta put the hours in!

There’s so many and I think that’s how our sound doesn’t really fit into a genre. I’d say mainly artists like M83, Tycho, The Japanese House and acts like that, but also a lot of post-rock/soundtrack music like Explosions In The Sky and This Will Destroy You. I listen to a lot of Punk and Hip Hop too, and one of my favourite eras is like the american emo bands that came out of the midwest in the 90’s and made like one record. Stuff like Mineral’s ‘The Power Of Failing’, American Football’s self titled & Jawbreakers ‘Dear You.’ Also Julien Baker, can’t forget her.

I think our London headline back in February was my favourite. It was a sold out night at The Hope and Anchor which is a venue that you can tell has so much history to it just by standing in it. Everyone was there and no matter if it’s one person or 200 people singing your song back to you, I actually get so emotional when that happens, I don’t care how lame it sounds haha – it’s such an amazing feeling.

Kind of like a dream pop fusion with a touch of soundtrack – esque electronica? I don’t know really…everyone always says it should be at the end of a big indie movie, like when the guy is running to the girl and stuff. Wait, that kind of makes us sound like Coldplay – we don’t sound like Coldplay.

I don’t know really. I’ve not really thought about that because I don’t think there is one. And I’m sure if there was and I was in it, I’d be thinking about the next thing. I think this industry is like that – it’s so fast paced you don’t actually get time to enjoy things when they come because you’re thinking about the next thing. Like you could play the John Peel Stage at Glastonbury and be like fuck, I want to be on the Pyramid now, how do we make that happen?

We love your latest single ‘Bright Blue’, can you tell us some more about it?

I wrote ‘Bright Blue’ over the lockdown period, I think it only took a day or so. It’s about a period of confinement in my life last year when I was battling severe depression and anxiety, having just lost a close friend who I wrote all our music with to suicide. I couldn’t really get out of bed for a few months and I found everything really difficult. It’s about wanting to see the end of a bad situation but feeling like it will last forever. I kind of feel like this year has felt a bit like that too.

Your sound is often characterised by its ethereal electronic sound, what is the process of putting tracks together like for you as a duo?

I do most of the writing, and I send it to Rob who always helps arrange/change the beat. Usually I start with a beat or a chord progression. I’m much more about creating the atmosphere rather than going into crazy theory. Like I don’t care if a song has two chords, loads of great ones do. But yeah it depends, it’s a lot of layers usually and then I build it up from there. Lyrics are a huge thing for me, so often I’ll build a song around just this one line that hits me hard. Like another song of ours called ‘She Can’t See Me’ has this line – ‘I was begging you please don’t leave, I am nearly what you want’ – I still think that’s one of my best lyrics. But when I came up with it I was like damn, this has to be a song, and we just went from there really. That’s often how it starts actually, because I’m so careful with our lyrics and when I find a line that hits hard it just creates the emotion of the song.

I also love linking songs together; Another one of our tunes called ‘My Own Ceiling’ (which ‘Bright Blue’ is a callback too) has the line ‘it’s a terrible thing, that I was left in, my own ceiling’ whereas ‘Bright Blue’ goes ‘now I’m on fire with a ceiling so low’ and a song I wrote last week goes ‘now I see sky where there once was ceiling, I think I got all my feeling back.’ It’s kind of like the start, middle and end of depression, spanning songs that were written unintentionally as parts of the same story over four years. Literally no one will ever realise that, but it influences a lot of my writing. I think of Luna Pines kind of like one big story, it’s bigger than us in so many ways.

I’m not sure haha, but I’m on the phone to my sister whilst I’m writing and she says she is, which might be true. There’s a big group of my mates who are musicians and are amazing who I love and who are so supportive to us. One that you must check out is George Gretton, he’s a genius. 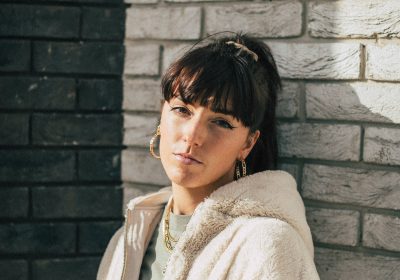 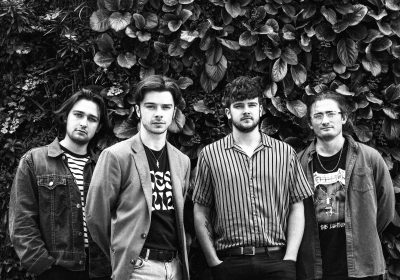