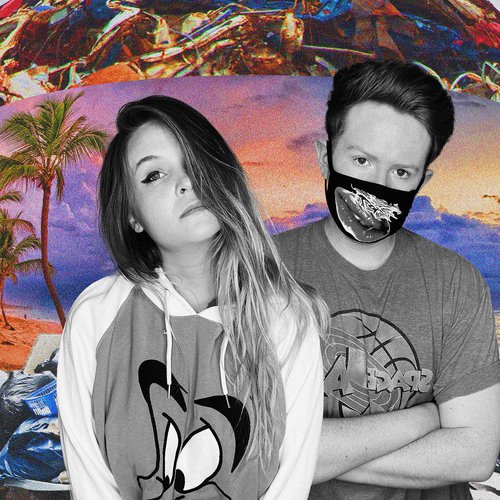 Exploring the search for identity, the lyricism in this one is the highlight, with the confident, emotive strong vocals a close second.

‘Blank Space’ is a calm and self assured offering that’s got us hooked. We can’t wait to hear more from clide as he continues to develope his musical style.

Cherryade will always hold a special place in our hearts from back in our Born Music days when they performed live for us at The Finsbury in London.

Their new effort ‘Only Fan’ comes in a double single package alongside ‘Sick!’ both of which were written and recorded during lockdown. The tracks are also a taste of what’s to come from their upcoming self-produced mixtape that’s set for release later this year.

‘Only Fan’ specifically is the stronger of the two, exploring themes of sexuality and specifically new platform OnlyFans. Ella explains more. “For us, this is a fun song about owning your own sexuality and empowering yourself. We wanted to flip the narrative on J Lo’s ‘Love Don’t Cost A Thing’, because sometimes we deserve nice things we can’t afford ourselves…”.

Alex continues: ‘OnlyFans is such a controversial topic, but if people are using it to empower themselves, and sex workers have safer environments then to us it’s a really positive thing. Maybe we should sign up to pay for the next mixtape…’.

Get ready for some large vocal range on this new one from Starling. ‘No Leader’ is a powerful statement from the artist, with plenty of attitude and impressive high notes.

Serving as the first taster of her upcoming debut album To Be Alive, ‘No Leader’ showcases her experimental and adventurous side, with a whole array of influences and styles present in one condensed, catchy bop.

Speaking about the new track, she comments, “I had taken ayahuasca in the forest and it taught me that in all the time I had been looking to others for answers I should have been looking to myself. In a constant quest to find myself, to understand meaning, life and my purpose I tried every therapy, meditation, and immersion possible and in this started to realise, I was the one I was looking for. Every type of spiritual excursion was had from vipassana to trauma therapy to kundalini and it guided me to me. This is the truth. When no one is here to guide us, or what we are told doesn’t resonate, we must guide ourselves… and be our own leader.”

Big day for Dublin’s Sprints today as they not only drop this raucous effort in ‘Drones’, but also announce their debut EP!

Teetering on that edge of complete anger-fuelled energy, Sprints have managed to bottle the adrenaline and tension and use it to their advantage. Play it loud and expect plenty of feedback, but be prepared, you’ll really be missing the moshpit here. Any fans of Soeur or Girl Band will definitely love this one!

Speaking of ‘Drones’, lead singer Karla Chubb explains, “Drones is very literally about my struggles with imposter syndrome. I think being a female in music, I struggle a lot with feeling like I have something to prove. It’s not okay for me to just be good, I have to be great. I have to prove constantly why I am deserving to be on the stage, or holding that guitar or that microphone. That pressure can be very difficult to deal with, and I think a lot of the times you doubt yourself then, am I actually able to write? Or is this all shit? Drones is about my experiences with dealing with this pressure, but realising that a lot of people have these struggles. The bars fill, the car parks fill, life seems to go on and on, and we can become so focused internally on our issues that you don’t realise that maybe while I was wishing I was someone else, they’re also wishing the same thing.”

Taking things back to our classic indie ways, ‘Dizzy’ from Arms Akimbo is a well produced slice of pure indie-bop. A real nice easy listen.

Lyrically centred around the love/hate relationship that musicians have with being on the road for a long period of time, and how dizzy the whole process can be.

Simple enough, but the track is a proper earworm in the making. You’ll find yourself humming along to it in no time at all.

We all know that Sweden is home to some of the best pop artists in the world, and that’s no exception for this Swedish dream-pop trio, Vivii.

New track ‘Rendevouz’ comes straight from their upcoming sophomore album and is a dreamy, mellow slice of bliss.

Continuing that ethereal aesthetic that we’ve all come to love them for, but this time with an extra edge thanks to some synth-pop goodness.

Speaking about the new track, they explain, “It brings us back to the mixtapes days. The feeling of pushing play and then entering into the world of whatever that song would give. Some songs would take us to our favourite places that no-one knew about, but we haven’t been back there for a long time, this song brings us right back to that same spot, hopefully it will take you on a trip as well.”

A proper belter to end today’s collection with. KIT’s new effort ‘You Act Like A Child’ is a real step up for the Melbourne indie-rock act.

Building up to her debut solo EP, set for release on November 13, ‘You Act Like A Child’ is a powerful punch and taste of what’s to come. Inspired by an argument with a close friend, you can really feel that energy throughout the track, making it one powerful track indeed.

Explaining more, she explains, “I had a particularly hectic argument with a friend and it got me thinking about the things we do and say in the heat of the moment. We act like children sometimes. We throw these fits of rage and then when we’re asked if we’re okay we are too full of pride to say we’re hurting. Or that we’re sorry. And I think that’s dumb. I want us all to do better. Communicate openly. Be wrong. Be sorry. Swallow our pride and our egos and ask for closeness. I think that’s the way you get through to the other side and THAT is where the good stuff is.”